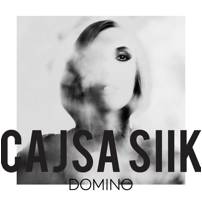 Cajsa Siik is a Swedish songstress who is set to release her 3rd album Domino on Birds Records. This luscious LP is released to the World/ Scandinavia on 10th May and then it hits the United Kingdom on 2nd June. I’ve been lucky to preview this record and it is blissful pop which has resulted in something rather magical.

Siik made her prescence known in 2012 as she released her debut Plastic House LP which featured 7 sensational tracks. This whimsical record spawned the singles Ego, Was I Supposed To and Dali. Then 2014 saw Cajsa bring out the captivating Contra which was highly acclaimed.

The delightful Domino was recorded in in Stockholm with producer Rolf Klinth and sees Silk embark on a much bolder direction than in her previous material that still manages to maintain her core sound. At this moment in time Domino has produced 2 singles and these being Talk To Trees and the recently released White Noise. 21st April will see Cajsa drop the 3rd single and this being Empire Mine.

Speaking about the record, Cajsa Siik explained that, “DOMINO can be described in two different ways. First I wanted it to represent the fact that we’re all connected to each other and that we have a responsibility towards each other and this world. To shoulder that responsibility is easier said than done, but we must try. Be aware. Not only mind our own business. I’ve given that a lot of thought lately. Secondly, every song on this album depends and relies on the other. Together they create a unit and the unit is supposed to be diverse. I aimed for creating a dynamic album”.

I have nothing but positive things to say regarding this album. Domino is pleasurable pop which consists of 8 gorgeous tracks. There is something about Scandi Pop which leaves me utterly mesmerised. It all kicks off with White Noise and this is a whimsical tune aided by hypnotic lyrics and a sleek synth melody. Silk’s enchanting sugary sweet vocal delivery reminded me of Kyla La Grange. All in all this was a beautiful glitzy pop song which left me in a dream like state. Sad Celebration and this was a wondrous tune aided by lyrics which had me hooked and a charming vocal delivery. Yet again I could see shades of Kyla La Grange and Kate Bush when listening to this succulent song. It may be a Sad Celebration but this shimmering tune had me smiling from beginning to its very end. Talk To Trees was a splendid number which had an opening that was reminiscent to Katy Perry’s Part Of Me. Anyways this was the first single to be taken from this exquisite album and it’s an extraordinary effort. Aside from that Talk To Trees was an uptempo tune aided by dream like lyrics and those vibrant vocals were hazy. Siik describes this sumptuous song as being a “colourful dreamy zone where I felt connected with reasons and beliefs. Like a subconscious talk with nature. Like a blessing or a blind spot”. Track 4 comes in the shape of Solar Still. This number was so blissful, the lyrics left me hooked and then Cajsa’s vocal tones were incredibly soothing. The forthcoming single Empire Mind was an upbeat jam aided by breezy/ entrancing lyrics and Siik’s succulent vocals which packed a punch “Empire State of mind/ Where everything’s fine/ Dance through the heat”. Well this pacey number was so breathtaking plus it was packed with plenty of desirable hooks. Following on you then had Frozen Tongue this number is a single in the making. Aside from that this was a soothing cut which had me swaying from side to side. Minute Road was a bright and breezy cut led by Cajsa’s magical vocal tones. This beautiful song was aided by pleasurable enthralling lyrics which left me in a daze. Things then come to an end with Shallow Light and this showcased Siik’s crisp distinct vocals which sent shivers down my spine. This entrancing number made me think of Lana Del Rey.

OVERALL: From having listened to this LP I can tell Cajsa is a talented individual. What she’s written is literally a sheer masterpiece. Both White Noise and Talk To Trees are merely tasters of what to expect from Domino. The likes of Shallow Light and Frozen Tongue are literally a breath of fresh air.

Empire Mind may be the upcoming single but each of these cuts featured oozes plenty of potential.