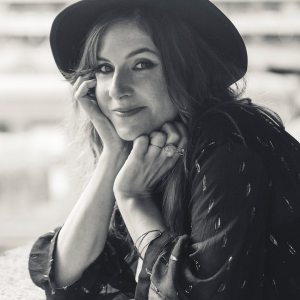 Nikki Loy already has a wealth of music experience which includes busking, festivals, attending Hillsong Music College in Australia, writing a column for The Oxford Times and writing 52 songs in 52 weeks. This Wednesday will see Loy making a short jaunt around the United Kingdom as she was announced as support for Shane Filan’s (ex Westlife) October Right Now tour.

Anyways Friday (14th October) sees the release of the brand new LP and this being Pivotal. I must say this record blew my mind Loy’s vocals were extremely smoky and distinctively smooth at the same time. I’ve been lucky enough to preview this record ahead of the release date.

Under The Lightning: Where shall I start. Under The Lightning is an incredible song with insatiable lyrics which left me completely hooked. Now UTL was smothered with plenty of pop rock vibes and the vocal delivery was something special. The smooth verses showcased Loy’s smoky/ soulful vocal tones then the moment the guitar kicks in that’s when this tune gained that extra edge. My favourite part had to be the blitzing chorus which I found to be highly contagious “I want to see the flash light up the sky/ I wanna feel your body burning against mine”.

Tongue Tied: This sumptuous number had been perfectly written with sublime lyrics which left me completely spellbound. Nikki had crafted something extremely beautiful. The lyrics made me picture making a clean break from a trouble some relationship “Don’t you have a lot to say/ So quick with the fear and the pain/ But you’re just the same/ But a little bit less brave/ And it flickers across my face/ All I’ve been holding back these days/ That I don’t need you now/ And I don’t want you around/ So you can leave right now/ Cause I’m not yours, not yours, not yours”. I actually found those delicious lyrics to be upbeat and at the same time you could consider Tongue Tied to be an uplifting anthem.

Fill My Mind: If I was to sum this song up in one word it would be enchanting. Fill My Mind was a whimsical country esque jam aided by bright and breezy lyrics. Actually within my minds eye I’m picturing a warm Summer’s day. Now Loy’s vocals were sweet like cinnamon and the smoothness sent shivers up my spine. Just listening to this cheery song leaves me smiling from beginning to end “You Fill My Mind/ Almost all, all the time/ You Find My Mind/ All the time/ You’re the weakness in my knees/ You’re the phantom in my dreams/ Like a siren calling to me/ A compulsive melody”.

Walk Away: Now Walk Away was a fresh and funky cut aided by lyrics which can quite easily have you moving on the spot. Nikki’s sizzling smoky vocal tones were sensational and this impeccable tune showcased her splendid songwriting skills.

Closer: Just listening to this tune makes me lost for words. Closer was a dreamy ballad and extremely cute at the same time. The lyrics have me picturing a girl who is infatuated with someone whom is no good “I’m trying not to think of you/ Cause every single time I do/ I feel the heat run right through/ And I don’t know what to do/ So my mind gets carried away/ Impatient for the light to fade/ This feeling where the moments fall/ Like a drug that pulls me back to you”. Bundles of soul oozed from Nikki’s extraordinary vocals.

Pivitol: WOW what a tune, Pivotal was a right epic and it has bundles of single potential. Nikki Loy’s vocals were ever so exquisite, the vibrant verses were awesome and the fast paced chorus was smoking. Nikki was right, sharing the same title of the album this moment really was Pivotal and this tune was a a right epic.

Reverie: Now this was a delectable piano pop cut with smooth dreamy vocals which left me completely captivated. I literally adored Reverie everything about it was spot on, the lyrics were enthralling and Loy’s vocal tones left me in a daze. Nikki already has this sweet song on her YouTube channel but it ‘s completely different when compared to the polished off album version.

Do That Again: I found Do That Again to be extremely charming, the lyrics emitted plenty of warmth and I really enjoyed the tenderness “The way you hold my gaze/ I know we could be here for days/ When you whisper in my ear/ All the things I wanna hear/ Do That Again”. Unlike the prior numbers this had been stripped back then once it progressed different musical instruments were added into the mix.

Hold Me Now: Ending this sublime LP is this tantalising tune. It is well known to save the best till last. Even though I adore this record, Hold Me Now is extremely light oozing plenty of uplifting pop vibes. Nikki’s vocals were top notch and the lyrics had me hooked from the word go. Those lyrics may have a dash of emotion but the mellowing melody just leaves me grinning till the very end “Come Hold Me Now/ Wrap your arms around me/ Cause I’m bursting with these tears I’m holding in/ Come Hold Me Now/ Let your love surround me/ Come Hold Me Now/ Don’t let this consume me”.

OVERALL: Pivotal is one extraordinary LP each tune has been polished off to perfection. Way back in 2014 Nikki Loy embarked of a songwriting challenge. This involved writing 52 songs in 52 weeks and Nikki actually accomplished the task. Each tune wrote was utter brilliance, they were so good Nikki even released the Naked: Part 1 LP which consisted of 13 of those tracks.Now Pivotal is Part II and from the 10 showcased tracks, 9 were written during that challenge. Under The Lightning was in fact written during the first week.

I adored each tune on this record but the ones which had that slight edge were Hold Me Now, Closer, Pivotal and Under The Lightning. Nikki Loy does truly have a gift for songwriting and I look forward for what this pop princess offers next.